EVOFILM® solar film is a high-quality pre-cut solar film for tinting windows on all car models. With EVOFILM ® solar film, it is easy to tone the windows of a car yourself at a reasonable price. Here we show how it works.

The installation instructions for mounting EVOFILM in English can be read here or downloaded here. The assembly instructions and videos are also available in Swedish, Danish, Finnish, Norwegian, Dutch and French.

Instructions for other languages such as Polish, Czech, Italian, German, Spanish, Portuguese and Arabic can downloaded here.

Applying window tint film can be both simple and complicated. Adhesive-free precut window tint film does not require a lot of prior knowledge or any special tools to get a good result. If you are going to apply adhesive-mounted window tint film and have not done it before, you should get help from someone knowledgeable.

The most important thing for a successful result is to work calmly and methodically. Measured, rested and without time pressure is our best professional tip!

An absolutely clean window is the most important thing for a good end result. Feel free to start cleaning with spirit and soft sponge. Wipe clean with lint-free cloth, such as a microfiber cloth. Spray the window with mounting fluid and remove the water with the ordinary window rubber scraper as in the previous step. The window is then absolutely clean from particles before you start to apply the film.

Rinse the film in a bucket or tub of mounting fluid to thoroughly remove all particles from the film, before spraying the mounting liquid and putting the film in position. Use disposable gloves when you apply the film.

Do not mount different tint film in temperatures of more than +25 degrees, or below +4 degrees (frost). Allow the film to dry thoroughly before cleaning or rolling down the windows. Allow to dry, preferably in a garage, for at least 24-48 hours before using the car, and keep in mind that it may take up to a week before the film has dried properly. The colder it is, the longer the drying time.

Almost all of the problems with window tint film, regardless of type, are due to a poor application. In the case of removable adhesive-free window tint film, the problem is very easy to solve. Remove the film and reapply after reading the assembly instructions carefully, at least twice. If you have applied adhesive-mounted window tint film and the film has dried, it is very difficult to correct any problems afterwards. You should then consult a professional or repeat the work. 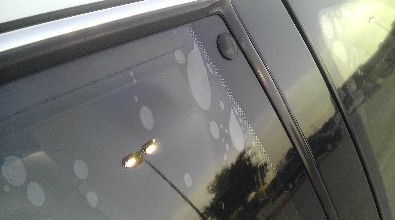 The window tint film does not fit

The window tint film comes off

If you see small white dots on the window from outside the car when the window tint film has dried in, it is because of dust grains sticking to the film, the hardness of the water, or too much detergent in the water. Whatever the cause, the problem is easy to solve if you have used removable window tint film. Remove the entire film, clean the window and the film, and reattach it correctly. Use 3 drops of detergent/pint distilled water.

EVOFILM® is an adhesive-free removable window tint film of the highest quality which offers very good protection against UV- and IR-radiation. EVOFILM® is easy to apply, and no prior knowledge or special tools are needed for successful results. EVOFILM® is delivered precut for all car models for quick and easy application.